Whether secular or orthodox, all Jews can feel at home in Frankfurt. Our community offers synagogues and prayer rooms for various groups as well as the additional infrastructure.

The largest synagogue in Frankfurt is the Westend Synagogue in Freiherr-vom-Stein-Straße. The building survived not only the November pogrom but also the NS regime years that followed, despite serious damage. Services here follow the Nusach Ashkenaz rites of the Ashkenazi Jews. The synagogue is home to what we call the ‘Stibl’ and the Beth Hamidrash Westend, and is characterised by the rites of the Hasidic movement. It is also home to the Egalitarian Minyan, under Rabbi Dr Elisa Klapheck.

Frankfurt’s second central synagogue is the Baumweg Synagogue, located in the Ostend area of the city, which also offers regular prayer times. Other synagogues are the Atereth-Zwi Synagogue in the Jewish Community’s Centre for the Elderly at Bornheimer Landwehr, and the Henry and Emma Budge Foundation Synagogue. Rabbis Shlomo Raskin and Andy Steiman welcome young and old to the Henry and Emma Budge Foundation Synagogue.

Outside of Frankfurt, the Jewish Community’s centre in Bad Homburg also offers a prayer room, and for those embarking on travel, there are several options at Frankfurt Airport:

More than 100 years of history and change

Frankfurt’s Westend Synagogue was consecrated in 1910 and is the only one of the city’s four major synagogues to have escaped total destruction by the National Socialists.

Frankfurt’s Westend Synagogue is an architectural gem and worth a visit if only to see its majestic dome. The original structure in Freiherr-vom-Stein-Straße (formerly Königsteiner Straße) took two years to build and was consecrated on the 28 September 1910. The interior was one of the most elaborate in Germany. Rather than being restricted to the gallery, women could be seated on the lower level, alongside the men but on separate sides of the nave. The synagogue also had an organ.

Run as a liberal establishment by Rabbis Caesar Seligman, Arnold Lazarus and Georg Salzberger, the synagogue used to be so full on High Holidays that from 1918 an additional service was held in the main auditorium of the Philanthropin.

Prior to the construction of the Westend Synagogue, the main House of Prayer had been run by the private association Westend Union (Immanu-El-Verein) in Niedenau 21. It had been consecrated in 1868 by the reform Rabbi Leopold Stein.

The Westend Synagogue was the only one of Frankfurt’s four major synagogues to survive the November pogrom in 1938 and the bombings of World War II, albeit severely damaged. During the war it was initially used to store stage sets for the opera house. It later became a warehouse for furniture belonging to ‘fliegergeschädigte Volksgenossen’ — ‘members of the national community injured during air raids’. On 20 March 1944 an air raid on Frankfurt brought firebombs raining down onto the synagogue, destroying all that had remained after the pogrom, the so-called ‘Reichskristallnacht’.

By the end of the war, only a few of the over 11,000 Frankfurt Jews deported to concentration and extermination camps had survived. In early September 1945, on the eve of Rosh Hashana (New Year), a number of them gathered in the patched-up Westend Synagogue along with Jewish-American occupying troops. The ceremonial speech was delivered by Rabbi Dr Leopold Neuhaus, who had been the last rabbi of the Jewish Community in Frankfurt until 1942 and became the first of the ‘new’ community after the war.

In June 1948 the reconstruction of the Westend Synagogue commenced as part of the ‘reparations programme’. The City of Frankfurt and State of Hesse provided 800,000 Deutschmarks in funding for the project, and the architects Max Kemper and Werner Hebebrand joined forces with the painter and graphic designer Hans Leistikow to redesign the interior in simplified form. Little remained of the synagogue’s former glory.

When the Jewish Community in Frankfurt was re-established in 1948, it consisted for the most part of Shoah survivors from eastern Europe. Having grown up in an orthodox environment, most of them felt the need to retain their approach to Judaism as a reminder of their families and lives before their destruction, even though they did not necessarily abide strictly by the commandments of Orthodox Judaism. Since its re-consecration, the synagogue has therefore operated as an orthodox establishment, with separate areas for men and women. The organ is not used during services.

The Westend Synagogue was officially re-consecrated in post-war Germany on 6 September 1950 and operated under the auspices of liberal rabbis. The ceremonial speeches were given by Georg Salzberger, who had emigrated to London, and the incumbent Rabbi Wilhelm Weinberg, and a synagogue choir was brought in from Paris.

Between 1980 and 1984 the Jewish Community in Frankfurt’s largest place of worship underwent a renovation. Blackened over the decades, the limestone facade was restored to its former glory thanks to the efforts of a campaign to save the Westend Synagogue, launched by Council member Dr Henryk Gelbart. Between 1988 and 1994 the interior was also refurbished, directed by the architect Henryk Isenberg and based on his plans.

When the US army left Frankfurt in the mid-1990s, some of the younger community members who had regularly attended their liberal services in the US Central Chapel, decided to continue the tradition in Frankfurt. Initially, they worshipped in various locations, but in the late 1990s Ignatz Bubis, Chief Executive of the Jewish Community, invited them to use the Community Centre.

Known as the Egalitarian Minyan, the group has since become an integral part of the Jewish Community and is headed by Rabbi Elisa Klapheck. Since October 2007 they have had their own fixed location in the small former weekday synagogue within the Westend Synagogue building, bringing liberal Judaism in Frankfurt back to its original birthplace.
The Westend Synagogue is the main place of worship for Frankfurt’s Jews and home to members of all denominations.

Atereth Zvi Synagogue is located in the Centre for the Elderly, which was originally built in 1973 to 1977 according to plans by the architect Hermann Zvi Guttmann, and then rebuilt in 2005.

PRAYER ROOM OF THE EGALITARIAN MINYAN

The Egalitarian Minyan is the liberal congregation of the Jewish Community in Frankfurt and led by Prof Dr Elisa Klapheck and Chasan Daniel Kempin. Services are held in the left-hand annex of the Westend Synagogue in Freiherr-vom-Stein-Straße.

The Schlomo Reiss Synagogue Choir is looking for enthusiastic singers with a basic understanding of music who would be willing to sing at services in the Westend Synagogue. As well as being an opportunity to develop their talent, they get to perform with one of the world’s top cantors. Rehearsals are held on Wednesdays from 8.00 to 8.45 p.m. in the Youth Centre in Savignystraße 66.

If you are 17 or over and interested in joining, please contact the choir’s director, Benjamin Brainman on 0178 / 1783352 or via email at benjaminbrainman@hotmail.com. 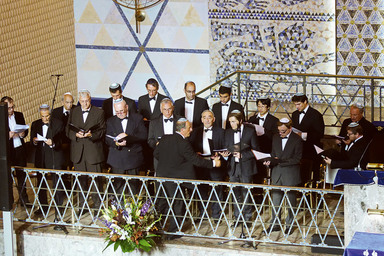 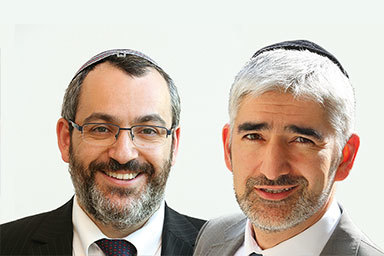